This page is dedicated to my friend Ricco Sanchez; ROAD NAME Chewy. 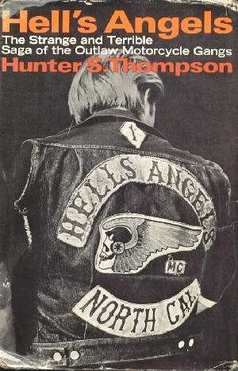 ​California, Labor Day weekend, 1964 . . . early, with ocean fog still in the streets, outlaw motorcyclists wearing chains, shades and greasy Levi’s roll out from damp garages, all-night diners and cast-off one-night pads in Frisco, Hollywood, Berdoo and East Oakland, heading for the Monterey peninsula, north of Big Sur . . . The Menace is loose again, the Hell’s Angels, the hundred-carat headline, running fast and loud on the early morning freeway, low in the saddle, nobody smiles, jamming crazy through traffic and ninety miles an hour down the center stripe, missing by inches . . . like Genghis Khan on an iron horse, a monster steed with a fiery anus, flat out through the eye of a beer can and up your daughter’s leg with no quarter asked and none given; show the squares some class, give ‘em a whiff of those kicks they’ll never know . . . tense for action, long hair in the wind, beards and bandanas flapping, earrings, armpits, chain whips, swastikas and stripped-down Harleys flashing chrome as traffic on 101 moves over, nervous, to let the formation pass like a burst of dirty thunder . . . The run was on, “outlaws” from all over the state rolled in packs toward Monterey; north from San Bernardino and Los Angeles on 101; south from Sacramento on 50 . . . south from Oakland, Hayward and Richmond on 17; and from Frisco on the Coast Highway.  The hard core, the outlaw elite, were the Hells Angels.  Wearing the winged death-head on the back of their sleeveless jackets and packing their “mamas” behind them on big chopped hogs.

The freeway was crowded with taxpayers heading out for a Labor Day weekend that suddenly seemed tinged with horror as the Angel band swept past . . . this animal crowd on big wheels, going somewhere public, all noise and hair and bust-out raping instincts . . . the temptation for many a motorist was to swing hard left, with no warning, and crush these arrogant scorpions . . .    excerpt by Hunter S. Thompson, Hells Angels:  The Strange and Terrible Saga of the Outlaw Motorcycle Gangs.

The “run” Hunter Thompson is referring to is the infamous “Monterey Run” that took place over Labor day weekend, exactly fifty years ago.  Over the course of that weekend, four Oakland charter Hells Angels were charged with “repeatedly assaulting” two under-age girls - in other words, rape.  All charges against the four Angels were eventually dropped due to lack of evidence after one of the girls refused to testify and the other girl proved to be “wholly unreliable.”  But the incident got the attention of the national news media and newly elected California attorney general Thomas Lynch, who moved quickly to mount an investigation of his own.  Lynch was out to make a name for himself.  And in the process, the Hells Angels soon became a household word - make that two household words.  According to Oakland charter president Sonny Barger - “The sixties were the best thing that ever happened to the Hells Angels.”

The resulting “Lynch Report” was “colorful, interesting, heavily biased and constantly alarming - just the sort of thing to make a clanging good item for the national press.”  Newsweek and Time magazines both ran articles soon after the Lynch Report was released.  And by the time the dust settled, the news media had a “guaranteed grabber on their hands” in the words of Thompson.

My mom watched Soap Operas and she subscribed to lots of women’s magazines - McCall’s, Glamour and Good Housekeeping are three that I remember.  She also subscribed to Time magazine.  Time was a weekly publication, so there were always several issues piled up on the coffee table.  I liked reading it because, in addition to current affairs and news, Time covered the sports and entertainment world.  Maybe Kip Larkin (who lived across the street) told me about the Hells Angels.  Kip had two teenage sisters who were socially aware, making Kip my trusted source for the latest in pop culture news.

Kip Larkin also had a Honda 50 (as in 50cc’s) motorcycle - actually Honda 50’s were classified as “scooters.”   Whatever it was, I wanted one because it went a whole lot faster than my Schwinn Stingray bicycle.  Plus any Honda was just plain cool.  I would leave my dad’s car magazines (like Motor Trend and Car & Driver) lying around on his end of the sofa, open to full-page Honda ads that he must have noticed.  But nothing worked - not even reciting their advertising slogan “you meet the nicest people on a Honda” numerous times.   My dad was having nothing to do with buying me a Honda 50, even if it really was just a scooter. 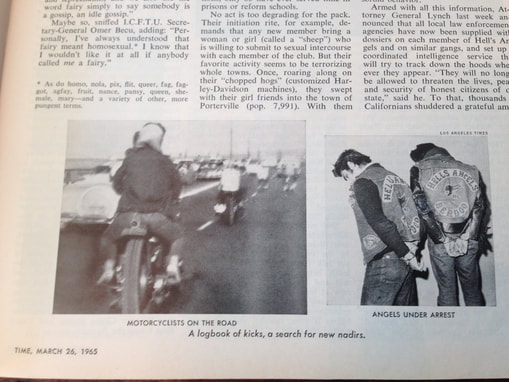 But I’m guessing it was a March 1965 Time magazine article entitled “The Wilder Ones” that was my introduction to the Hells Angels.  The mostly unflattering article talked about the Lynch Report, the Monterey rape case, and also gave a brief history of the club.  There were two pictures at the bottom of the page:  one blurry picture of an “old lady” riding on the back of a Hells Angel bike; and a second picture that showed two “Berdoo” (San Bernardino) charter Angels in handcuffs with their backs turned to the camera.  The two Angels are New York Bob (left) and Terry the Tramp, after a bust at the Harvard Apartments in Hollywood/Los Feliz.  Tramp later transferred from Berdoo to Oakland and became almost as famous as Sonny Barger.  Sadly, Tramp died from an overdose of Seconal on February 13, 1970.  He was 30 years old.

The New York Times described Hunter Thompson's portrayal as "a world most of us would never dare encounter.”  So when I spotted Thompson’s Hells Angels - The Strange and Terrible Saga of the Outlaw Motorcycle Gangs in Mills Bookstore, it was with some familiarity that I picked it up and and laid down sixty cents for the paperback edition.  My Christian school English teacher was not impressed when I presented her with a book report on the modern day barbarians - “To Kill A Mockingbird” or even  “In Cold Blood” would have been more “acceptable choices” she said. 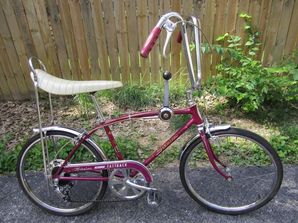 ​California, Labor Day weekend, 2014 . . . early, with ocean fog still in the streets.   The irony of getting on a bike this particular Saturday morning was not lost as I rolled out, making the short ride from home to Bobby’s Diner in Woodland Hills, packing Elisa on the back of the Road King.  At Bobby’s, we met up with our good friend Chewy and a couple of other bikes.  Our destination on this beautiful late summer morning - breakfast in Ventura, California.

As we rode north on 101, our Harleys flashing chrome as traffic moves over, nervous, to let the formation pass like a burst of dirty thunder, running fast and loud on the early morning freeway, low in the saddle, nobody smiles, jamming crazy through traffic, missing by inches  - I thought about how long 50 years is.   I thought about my mom’s magazines piled up on our living room coffee table, collecting dust.   And I thought about an impressionable kid, riding around his neighborhood on a purple Schwinn Stingray with ape-hanger handlebars, banana seat, and a 5-speed shifter - pretending it was a big chopped hog, like Genghis Kahn on a iron horse. 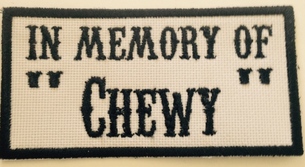 Chewy was a track star at Canoga Park High School.  He still holds the California state record for the 880 yards distance (1:51.3) set back in 1969.  He spent most of his life working for the City of Los Angeles Parks and Recreation Department.

My friend was hit by a careless driver while riding in the annual San Fernando Valley Charter Hells Angels Toy Run.  Chewy was blocking traffic for the pack at an intersection when he was hit.  Elisa and I were also participating in the HA toy run.  Chewy insisted that he ride behind us to make sure we stayed safe.  That’s the kind of person he was - always thinking about the safety of others first.  Since we were ahead of Chewy in the pack, we were not aware of the accident until we arrived at the HA clubhouse a few minutes later.  We rode straight to the hospital and were able to see him later that day.  Subsequent visits didn't indicate anything was seriously wrong.

But Chewy died two weeks later due to complications stemming from the accident and some questionable care he received while hospitalized.

The morning of the Toy Run, I recall seeing Chewy taking a selfie with one of the HA members.  The SFV charter (who sponsors the toy run every December) all knew Chewy, but this particular Angel was flying a Bakersfield charter rocker.   He didn’t seem to mind the interruption - Chewy had that disarming effect on people, even outlaws.  And leave it to Chewy to act like he was at Disneyland in the middle of a Hells Angels gathering.

I noticed several HA members were in attendance at Chewy's memorial service at a church in Simi Valley.  I meant to ask Chewy why he never patched in. ​ 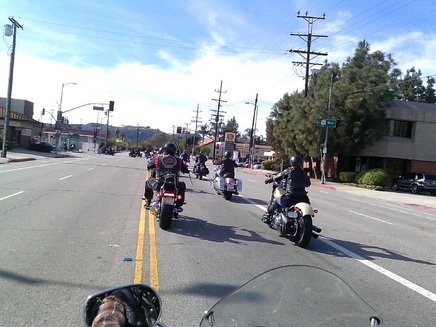 Cowards die many times before their deaths;
The valiant never taste of death but once.
Of all the wonders that I yet have heard.
It seems to me most strange that men should fear;
Seeing that death, a necessary end,
Will come when it will come . . .
William Shakespeare;  from Julius Caesar, Act II, Scene II


​Elisa and I are on the right - that's Chewy on Elisa's left
Start of the SFV Hells Angels Toy Run; Ventura Blvd, Woodland Hills
December 7, 2014
Proudly powered by Weebly