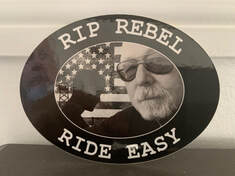 ​It is with great sadness that I pass along the news that Rebel passed away on June 19, 2020.  A few days earlier, he sustained a head injury from which he did not recover.  Rebel will be greatly missed by the biker and MC community.


Donald Charles Davis was a voice crying in the wilderness.  Mr. Davis wrote almost daily for his blog called "The Aging Rebel."  Everyone just called him Rebel.  With all mainstream media outlets routinely demonizing bikers in general and outlaw motorcycle clubs in particular, Rebel always cut through the shit and gave us the real story behind the "stories."

​In an interview with Seattlepi.com, Rebel commented on why people are attracted to outlaw motorcycle clubs.  Part of his answer was as follows:  Outsiders, people who adore Sons of Anarchy for example, possibly you but certainly people you know, are attracted to motorcycle outlaws because they are the you that you bind in chains. They are the chaos to which civilization must never be allowed to descend. They are the show. They are the you that you wish you were when you are humiliated or overwhelmed or bullied or condescended to or made to admit that you are small.

Okay, I admit I watched Sons Of Anarchy.  All seven seasons.  And I also watched both seasons of Mayans MC (Season 3 is coming but has been delayed).  And yes, sometimes they are the me that I wish I was.  So thanks Rebel for making me look in the mirror, even if I don't always like what I see.

"Out Bad" by Mr Davis is quite possibly the best book I've ever read about motorcycle clubs.  Ten stars.  Check it out.
https://www.amazon.com/Out-Bad-Donald-Charles-Davis/dp/1467950831/ref=tmm_pap_swatch_0?_encoding=UTF8&qid=&sr=
​
​
Proudly powered by Weebly